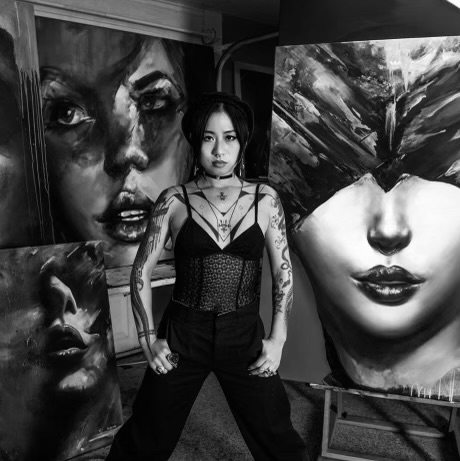 Lin Fei-Fei was born in Dailan, China during the Year of the Rabbit, a fortune teller predicted that she would be a boy. Her family was dismayed when Fei arrived in this world a girl, one of many times she would defy expectations. With the one-child law, Chinese families pinned all their hopes for future prosperity on having boys. The neighbors had one boy each and even offered to trade babies.

Lin immediately felt this disappointment and tried to fashion herself into the boy her family wanted, but she was urged toward typical girl behaviors. Drawing and painting offered her a haven: she could remake the world, tell her own truth. From an early age, her family recognized Lin’s talent and drive, putting as many educational opportunities in front of her as possible. She excelled, eventually completing her Master’s in Oil Painting at Luxun Academy of Fine Arts. This led to her participation in exhibitions throughout Europe, Asia, and the United States, where she ultimately relocated.

Lin’s imaginative process spans a broad vocabulary that utilizes traditional techniques in painting and paper cut-out, graff-style street murals, and installations. She has contributed to mixed media collaborations alongside musicians, writers, fashion designers, and virtual reality artists. As with all her art, Lin is driven by unearthing difficult truths, both cultural and personal. She’s drawn to concepts taboo in Chinese culture, e.g. sexuality and mortality, seeing it as her job to bring these core human experience into the light.